All photos are available for view in this post (along with others) here.

I have a fleeting understanding of the art, science and engineering of architecture. However, like most people, I have an appreciation of beautiful and/or interesting buildings.

Batumi’s architecture is surprising. Contemporary buildings are  daring and unusual, older buildings are beautiful Romanoff and other fin de siècle buildings. And, remnant of the recent 50 year occupation, there’s the soviet built buildings. Most are crumbling now, whether that’s from neglect or poor building techniques, it’s hard to say.

Remarkable, no?  Those mountains on the left side are in Turkey. We are very close to the Turkish border!

I still can’t wrap my head around the fact that, according to a 2011 census, Batumi is only 125,000 people. I’ve lived in Madison, WI, a town of 240,000 people for many years, and Batumi feels much larger. Some say it’s the summer visitors that swell the population. I guess the answer there is to wait and see!

Batumi was in the fabled region in pre-history of the Golden Fleece. It’s considered to be the destination of Jason and the Argonauts. A statue of Medea in European Square attests to this. 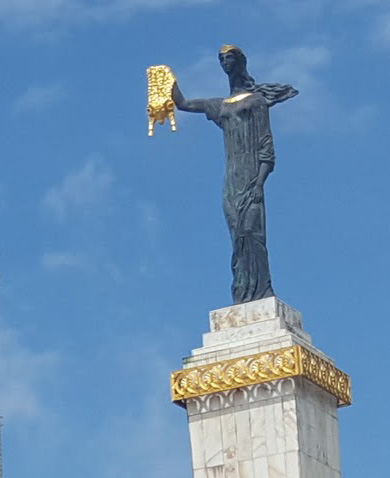 Batumi has flown the flag of many nations, entering into history as a Greek/Roman port, it’s name Bathys from the Greek for deep harbor. In the ruins of Apsaros, just to the south of Batumi, one can see the varied layers of history evident in the walls. This site served as Greek, Roman, Byzantine, Ottoman and finally a Russian fort. 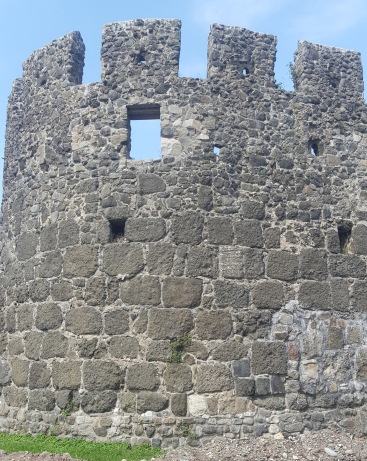 Of course, before, and interspersed in between the conquerors, the city was in various incarnations of what is now Georgia, and now it’s in the region of the Autonomous Republic of Ajara, within the country of Georgia.

With these competing empires vying for Batumi, there’s a history of religious tolerance here. Old and beautiful, there’s a mosque and a synagogue in old Batumi.

I especially like how the star of David motif is worked into the filigree ironwork on the synagogue’s fence .

Some of old Batumi’s buildings are reminiscent of New Orleans.

In the late 19th century, Batumi boomed as an oil city. It was one of the main oil ports of Russia. Oil was transported to Batumi from Baku by rail, later there was a pipeline constructed. The Rothchilds and Nobels both vied for the upper hand in the oil business.

Modern architecture verges on the bizarre. 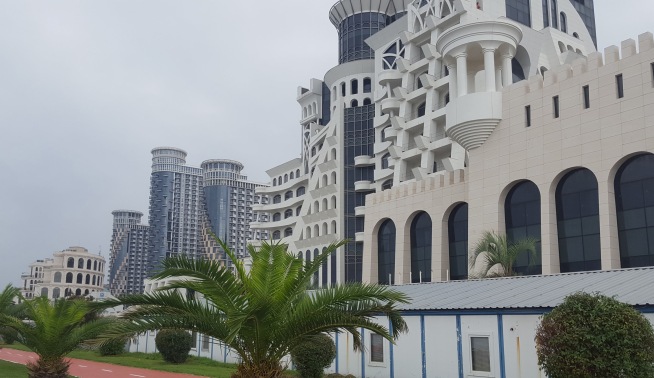 In Georgia’s new, daring architecture, some creations are truly remarkable, others have flopped. For instance a 37 story skyscraper which was to be the American Technological University is a awaiting re-purposing into a hotel.

On the remarkable side, a MacDonalds/fuel station creation by Giorgi Khmaladze has won accolades for it’s earth friendly, small footprint design.

The content of this website/blog are mine personally and do not reflect any position of the U.S.  Government or the Peace Corps. 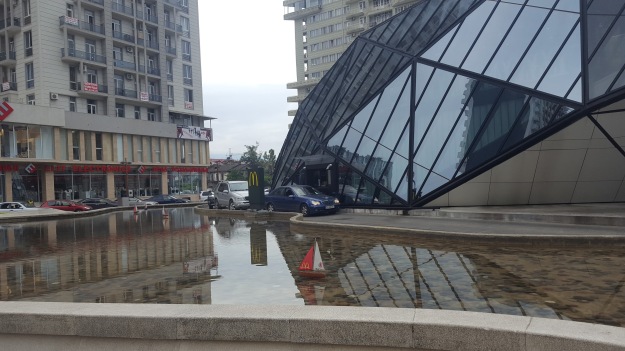